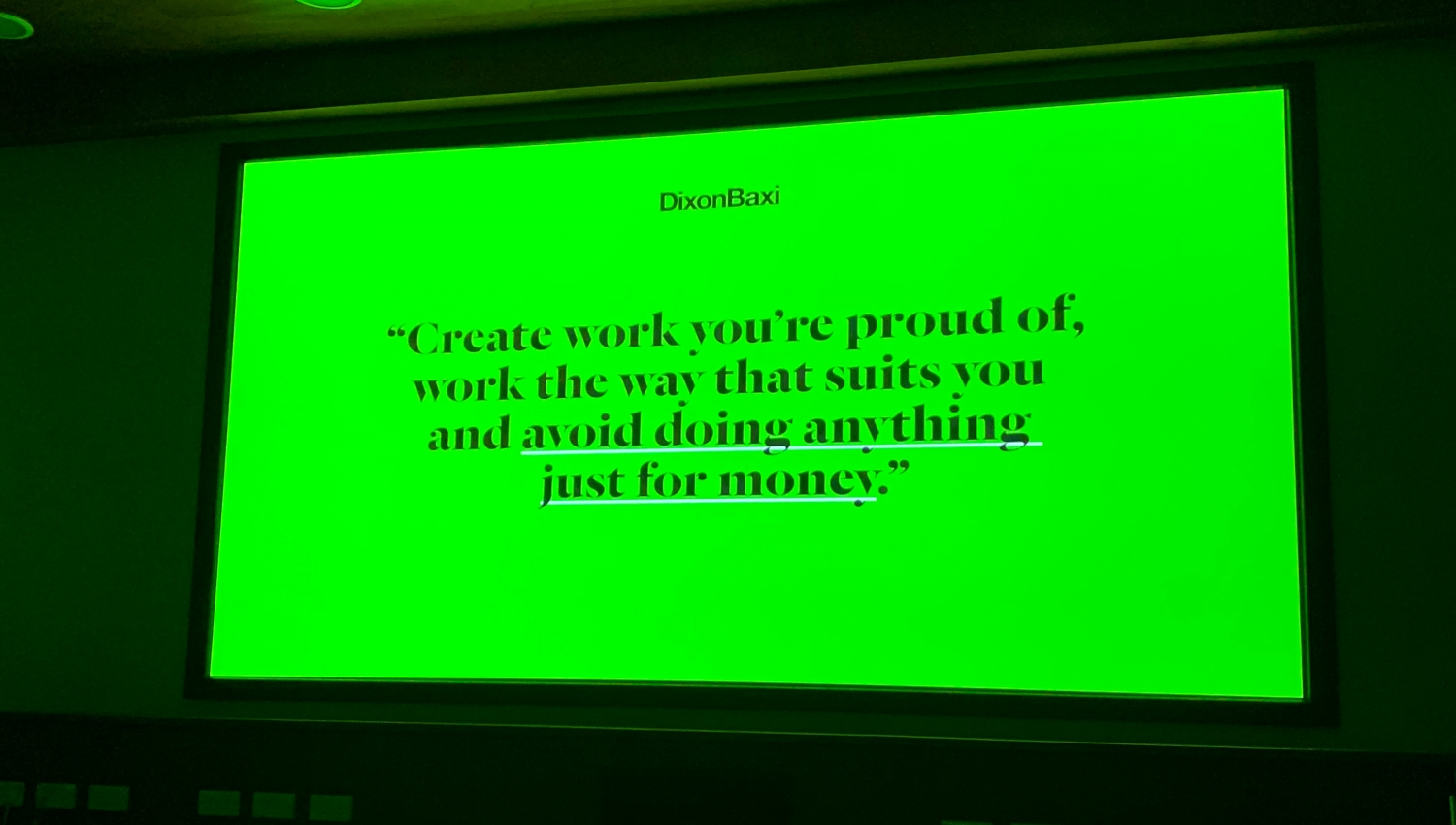 We are always keen to take in as much inspiration and words from the wise as we can, so when we found out that York was having a week of design related insights, workshops and celebrations – York Design Week, we jumped at the chance to attend!

A collaborative initiative from three creative agencies in York, Kaizen Arts Agency, Dogeatcog and United by Design, we loved that these agenices had created such a jam packed programme of events. We later found out that it was all self-initiated and mostly self-funded, we applaud you!

It was a friday evening talk we decided on, with two speakers – Signs by Umberto and Simon Dixon from Dixon Baxi. Three of us from Altogether travelled down on a rainy Friday evening, along with our friends and neighbouring studio Everything, and it did not disappoint.

Robert Walker from Signs by Umberto was truly inspiring. As he talked through his sign writing craft, we were blown away by his passion, attention to detail and level of skill. With techniques such as gold leaf dating back from the Victorians, he spoke about how he uses age old methods but with a contemporary angle for the future. His typography was stunning and each piece was a real labour of love. As a lecturer you could see he would really inspire the next generation!

Robert spoke about the love of what he does, and almost always spends way more time than he charges for…a familiar message in the creative industries, we love what we do, what can we say!

Next up was Simon Dixon from Dixon Baxi, the studio responsible for the recent AC Milan rebrand, well you can imagine the crowd were eager to see this!

Simon talked about his Yorkshire roots, having begun his career in York, working as a designer but also as a cleaner at the crown court – trying to make money so he could do what he loved. It was interesting to hear when he founded Dixon Baxi with Aporva Baxi, that they remained a small studio, with the two of them for over 5 years – building up a collection of work they were proud of.

Now they are a team of over 30 people working across the world. Core to their growth was their founding values and agency culture, jotted down when they founded the company, they noted things they ‘will do’ and ‘things they won’t do’. They will ‘be original’, ‘embrace change’, ‘be true to themselves’, ‘be independent’, ‘ambitious’ and ‘work directly with the decision maker’. Things they won’t do – ‘bullshit’, ‘cheat’, ‘work just for money’, ‘be afraid’, it was really refreshing to see such an honest talk in a way that really resonated with us.

Dixon Baxi’s work centred around simple, smart ideas executed in interesting, bold ways, from motion to static design, it was a joy to see the work and hear stories about AC Milan, working with Maldini and how to nail a pitch to Channel 4. Their approach to rebranding AC Milan challenged expectations, rather than change the badge that had so much history, emotion and human attachment to it, they focused on the spirit of the club and communicating that to the world. It was an incredibly powerful project.

As a small studio we were interested to know how Simon and Aporva grew their agency without losing their culture or vision. Simon believes it’s down to the right team led by the agency ethos and purpose and of course bringing new creatives in through their intern programme means they can organically grow their team through a shared vision. We 100% echo this sentiment, without organisational culture what do you have?

We were super inspired and of course had to head to the pub to de-brief, where we met up with some of the York Design Week organisers. All in all a different way to spend a Friday evening and we loved it. We look forward to next year and fully support the York Design Week team.

We also look forward to more events on our own doorstep, in the form of Northern Design who have a new programme of events launching in 2020. The creative industries, what a community to be part of 🙂